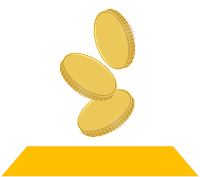 Just a quick post tonight to spruik 😀 the latest release of this handy little app.  In this release I have added a feature to track lifetime stats for heads and tails, as well as the longest streaks for both options.

As silly as it sounds, it is actually quite intriguing to keep tossing that virtual coin and see how over time the numbers for heads and tails even out as they should.  While at other times you can get really long streaks of just heads or just tails, skewing the total number one way or the other.

I can't post with just useless information though, so I will share one tidbit I recently observed that may be of interest to anyone looking to monetize their apps using the Microsoft Advertising Framework.

Low ad fill rates?  There may be a reason...

When I created the new Lifetime Stats page in the app and added a new ad unit, I accidentally selected a COPPA (Children's Online Privacy Protection Act) compliance rating that indicated the app was directed at children under 13 years of age.  This of course is not the case - it is for general consumption for young and old.

However, the learning is that the COPPA compliance rating for the one ad actually applies to all ads for the one app.  This then changes the ad serving algorithms that Microsoft applies for the app and all its ad units. In return, my ad fill rate went south...

By way of explanation Microsoft will only serve non-targeted ads to apps that are directed at Children under 13 years of age.

At this point I need to stress that you absolutely must select the appropriate COPPA compliance setting for your app.  At no point should ad fill rate considerations influence your declaration.  Just do the right thing, okay?

What's next for this app?

It was initially just a learning piece for myself as to how the Microsoft Advertising Framework actually works.  See this recent post if you want to read about it a bit more.

But now I'm actually thinking of putting in a feature that will aggregate data from all users across the world, by country, and then display it back in the app as a sort of "World Cup of Coin Toss" ladder.  Why, you ask?  Just for fun really.  And it could be an interesting learning on how to create the web APIs and database backend required for such a feature.

Anyway, feel free to comment if you like the idea.  Not much spare time at the moment but with enough encouragement it might just happen one day 😀