Windows based Microsoft/Nokia Lumia phones are out there, but nowhere near as popular as Apple's iPhones or Android based mobile phones. 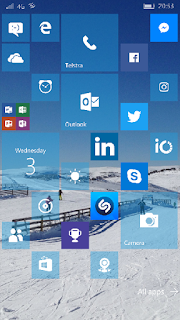 Even the hallowed Nokia brand did not help Microsoft to gain any traction in the mobile market, and neither did the Windows 10 release, the advent of Univeral Applications or new high powered flagship models such as the Nokia 950.

But are these phones worth a second look?  Could they be a decent choice for some of us that are heavily invested in the Microsoft eco-system and are maybe not as app hungry as some?

So let's see why you might bother spending your hard earned money on a Microsoft Lumia instead of an iPhone or an Android device.

Well, for starters the flagship Lumia 950 has a price advantage.  As a flagship model, it literally costs half of what an iPhone will set you back, with similar or better specs.

The camera on the 950 is sensational, with 20 megapixels a real treat for photo enthusiasts. Battery life is pretty good but probably no real differentiator.

Personally, I simply like the usability of the Windows phone better. I use an iPhone for work but have a Lumia 930 to muck around with for some app development. The fluid Windows user experience appeals to me.  Combine that with Microsoft Continuum and you have a decent productivity solution in your pocket.

I'll admit I am biased in the sense that I am a consumer of all sorts of Microsoft services, and therefore the Windows phone actually works better for me than the Apple products. Integration with Office, OneDrive, OneNote and Outlook is tight, and exactly what I need.  Cortana works well these days, and the voice guided navigation is solid.

Of course all of that is available on iPhones and Android as well, and for some - even most - those other options are more attractive.  Ask anyone and it usually boils down to style and app availability for iPhone and Android.  It is much better than Windows apps for certain.  So if you are app hungry be sure to choose Apple or Android.

The few non-productivity apps I use - some of the standard socials like Facebook, Twitter and Instagram - are all available and work well on Windows.  Using eBay and YouTube through the browser works well enough.  Most of the Aussie banks have a Windows version of their banking app.

But can you even buy the Lumia 950 any more?  It's largely gone missing from the Microsoft online stores, and retailers in Australia don't seem to carry any stock any more.  Some carriers still have the handsets available on post-paid plans, but that's about it.  I guess everyone's waiting on the rumored "Surface Phone"... but that's a whole other discussion.

The good news is that you can grab yourself a bargain getting a Lumia 950 second hand from eBay at a really good price.  Of course it's buyer beware.  Check the seller ratings, ask questions about the history.  Buying mobile phones second hand can be a lottery as there are plenty of "seller refurbished" units that are not worth buying.

If you must have all sorts of apps for all sorts of things in your daily life, the Windows phones are probably not for you at this point.

However, if you are already part of the Microsoft eco-system and you are looking for a well-spec'd phone and productivity tool at an affordable price, excellent usability, with an awesome 20MP camera to boot, then the Microsoft Lumia 950 (or even it's predecessor the Lumia 930) are worth your consideration.